The repository pattern has seen a lot of publicity lately – if you’re not sure how it works I would suggest that you take a look at Rob Connery’s excellent MVC Storefront webcast series.  While implementing the repository pattern a couple of weeks ago it struck me that I might be introducing subtle concurrency errors.

Don’t get me wrong – there is absolutely nothing wrong with the implementation – I’m simply trying to illustrate that we can use this class in a way that introduces concurrency errors.

A while ago I wrote an application similar to StackOverflow as an illustration of MVC – I’m going to use this as an example.  In this domain model we have a post object, and a post has zero or more comments. 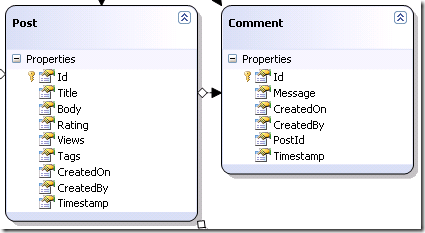 This is the ideal scenario for using the Lazy List class – we want to delay the loading of comments until they are used.  The alternative is to load all comments when we load the post object – an unnecessary (and possibly expensive) overhead.

If you don’t believe the lazy loading is working, fire up profiler and check for yourself.  Go on, I’ll wait right here.

There are 2 scenarios that I want to cover in terms of concurrency issues.  To get started, lets take a look at a single post with 2 comments.

So imagine Joe developer came along and asked a question about Attributes in C# and so far there has been 2 comments.  I loaded the post using the repository above and the query for loading the associated comments has been loading into the lazy list object but not yet executed.

Now let’s take a look at a scenario where a comment was added after we loaded the post but before the comments were loaded.

The lazy loading is working and it resulted in us loading data that wasn’t there when we loaded the original post.  So what should have happened?  What data should we have seen?

Now let’s look at another scenario where the results are not that great.

Imagine the same scenario as above, but instead of a simple comment being added, Joe developer modified his original post and 2 comments were added due to his change.</p>

Of course this is unlikely to happen in the case of a post/comment system and even if it does occur, the results are not that dramatic.  However, imagine a hospital system where the list of a patient’s medicine is lazy loaded or an accounting system where expenses against an account are lazy loaded – inconsistent results can have serious consequences.

So what should we do?

What’s the conclusion?  Should we stop using lazy loading in critical areas?  Not necessarily.  In the examples above, the post we displayed was only problematic when the post was modified before we loaded the comments.  By modifying the lazy list we can maintain the lazy loading as well as avoid concurrency issues.

My original idea was to join to the posts table and add a where clause for the timestamp of the post.  While this would prevent us from loading any comments that are not specific to the original version of the post, if the post is modified (as in the second example), the result would simply be that no comments are returned – the where clause would simply exclude all comments.  We would have no way of knowing if we are dealing with a post with no comments or a concurrency issue.

I’m not too crazy about using the TransactionScope object inside the Lazy List class, but I can’t see any other way of ensuring concurrency and still using lazy loading.

If I run the second example again an exception is generated. 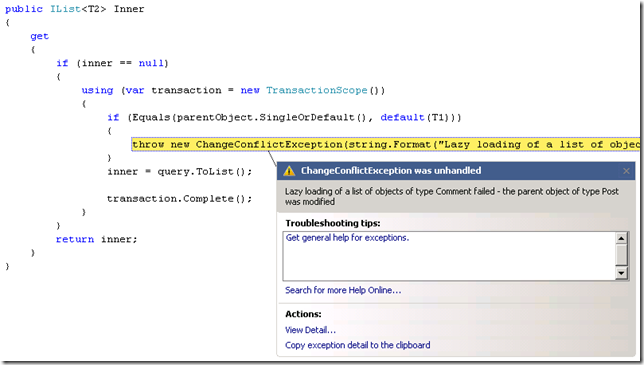